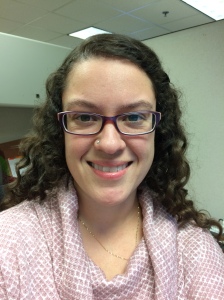 I’m a thirty-something who works in finance. I live in Cincinnati, OH in a beautiful Queen Anne style Victorian house.

Crafting, for me, started young – I can’t even recall a time I wasn’t crafty in some way. My first foray into yarn was doing plastic canvas embroidery and making Barbie doll furniture. Not long after that I learned to crochet from a book my grandmother gave me after asking to learn what she was doing (she crochets, afghans mostly these days). After that, I took up counted cross stitch and then came sewing when I took two fashion design classes in high school. My mom had a sewing machine from my great grandmother and I taught myself to sew from patterns on it. I still use this same sewing machine today!

I started knitting in 2004 when a co-worker was pregnant with her first child and I wanted to make something for her. I bought a “learn to knit kit” from Lion Brand for a baby hat and booties set. I did make the baby hat and booties (with very few problems) and ended up gifting them to the co-worker. I wanted to make a blanket, but I wasn’t quite able to get that done in time since it took a lot longer then I’d imagined! It wasn’t until the end of 2004/early 2005 that knitting really took a hold of me. Now I love knitting and almost always have a project with me, even if it’s just something small when I’m out and about. I like a wide range of projects depending on my mood. Sometimes I like a good challenge knit and other times I enjoy a lot of stockinette or garter stitch. I love Ravelry for keeping track of my projects and for finding new things to knit – I feel like I’m always spending time on there! It’s also a great place for getting to know other knitters, crocheters, and various fiber enthusiasts.

In the fall of 2008, I purchased a spinning wheel from someone on Craigslist. It’s a Babe Fiber Starter, single treadle wheel and after a bit of trouble getting used to it, I’ve managed to spin up some fiber. In January of 2012, I found someone local that was selling their Lendrum DT and it came to live with me! The Babe now lives with Jen (aka piddleloop) and she’s learning to spin. I’m still trying to find time to spin along with knitting, crocheting (occasionally), and whatever else is going on, but I work it in here and there.

I’m sure there’s something I might have left out here, so if there’s anything else you want to know about me, just ask :o)